October 15, 2008
You know that nagging suspicion you had that Bush was the worst president ever? You were right! At least since 1929, the American economy has performed the worst under Bush (if you remove Hoover who had to deal with the Great Depression). 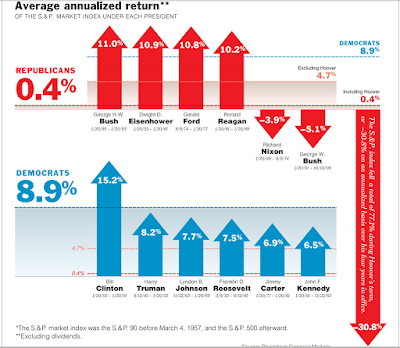 Keep this in mind as you go to the polls on November 4th.

Career 101: Dunk, layup or dribble out of bounds?


The way I see it, this dude has 3 options:
Reject the $55K increase and stick with his old job that he loves (dribble out of bounds)Take the $170K to his current boss and negotiate for a raise (layup)Take the $170K job, stick with it for a year and then bounce (dunk) The first option is what I call a poor person's advice. It sounds very noble...very "get a job you love and you'll never work". Well I am here to say that's bullshit (mostly). This is business; you should always get the most you can. Besides, this is a chance for this dude to change his baseline salary for future jobs. At his current job, getting that $55K will take several years because corporate America isn't going to offer you more than a token raise each year.

My advice would be to take the $170K offer to his current manager and get him/her to match it or raise his current salary. That's the layup option. It's not too money-hungry and doesn't summarily leave $5…
Post a Comment
Read more

June 07, 2019
I recently bought one of those wireless earbuds from Amazon. I spent some time researching all the available options and finally picked this particular one. It was highly rated on Amazon 5 stars from 54 reviewers (most of them "verified purchase"). Not great but not bad. Anyway, the earbuds arrived and I found this in the box:

Hmm, OK. Very mysterious. As instructed, I sent them an email for further information. Here's what I received:

Funny thing is I really like the ear buds. Excellent build quality and thus far, great performance. They reconnect to my phone 2-3 seconds after taking them out of the case. It's easy to create a good seal...sometimes so good I get that underwater feeling one gets with noise cancelling headphones. Even without the 40% incentive, I would have written a review...that's how much I like the ear buds. But now I feel weird about doing it. I wonder how many of those 54 5-star reviews were motivated by a 40% discount.