Game over: Trump is going to win

Now that we've establish my meager bonafides, I have come to a sickening realization that Trump will win this election. Don't get me wrong, he has no business winning. He's a crystallization of every qualities of a right wingnut job. He may not have started the birther movement but he adopted it as his child and did a fine job raising that racist myth as his own child. He's a dangerous moron that thinks he can solve complex problems outside his realm of expertise. For a guy that rich, he demonstrates a shocking lack of knowledge of basic economic issues.  He's publicly said he would be dating his daughter if she weren't his child and he wasn't married. Seriously, he said this. Not once, not twice...multiple times. Finally, when asked what his 1-year old daughter took from her mother, he said "breasts". This is not an exaggeration. Google it. There's video. This is a grown adult who doesn't care enough to hide that he's sexualizing his 1-year old baby. That's the guy the GOP has selected as their standard bearer. That's the guy the so-called evangelical wing of the country has picked to represent them: a tax dodging, draft dodging, baby sexualizing 70-year old who has never been elected to any office in his entire life! A guy whose "charity" simply takes money from one party, donates it right back to other parties and takes credit for the donation.

So why do I think he's going to win?

Because he's turned this entire election cycle into a Seinfeld episode...in that it's all been about nothing! Think about it. It's post-labor day and today's main topic is that Trump is going to accept that Barack Obama was born in the United States! This is what we are talking about less than 2 months to the election.

Let's go back to the GOP primary. How did Trump win? Did he win by distinguishing his policies from that of his competitors? No. Did he wow us with presidential qualities? Heck no! He basically insulted them (Little Marco, Lying' Ted and low energy Jeb...to be fair, Jeb Bush was severely lacking in energy), bragged about the size of his penis and called Rosie O'Donnell a pig. Oh yeah, he also made impractical YUGE promises that everyone knows he can't fulfill. But he won because he's the master at this reality show game. He's a master bullshit artist and he figured out a way to reduce the GOP primary to a reality show where nothing matters but the presentation and the bombast.

Back to the general election. I'll admit I didn't think he could do it. I thought he would be pummeled into submission by the Clinton Juggernaut. I said to myself "he's going to find out the difference between college and NFL". But guess what? He's done it. While the political talking heads are going on and on about electoral college pathways, he's dictating the agenda every single day (good and bad). It's September 16...where are the ads that'll bring this con artist down? Where are the ads that'll stitch together all of the rubbish he's said for the past 1.5 years? They are nowhere because he's got Hillary Clinton and the mainstream media talking about things he wants them to talk about. Even his refusal to release his taxes distracts the press from doing a full analysis of his tax policy. It's all about the razzle dazzle. Everybody (media, leftists) is asking him to show us his tax returns and his medical report. This past week has been spent talking about his medical status...that's one less week he has to spend defending the actual bullshit policies he's proposing. That's another week where his lies that he'll make the economy better gains more ground. It's a political rope-a-dope. By all counts, Clinton should be winning. She's a seasoned politician who has spent her adult life in the service of the public. But this isn't politics as usual. She's playing on Trump's turf now and she's losing

When Trump wins the election in November, remember this picture and know that he successfully got everybody to play on his terms in this election. 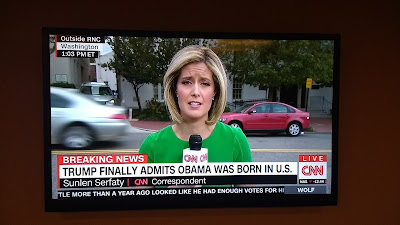 Finally, I'll leave you with this, the lyrics to Razzle Dazzle from the great musical Chicago:

BILLY(Spoken)
Thank you. Just a moment.
You ready?

BILLY(Spoken)
Roxie, you got nothing to worry about.
It's all a circus, kid. A three ring circus.
These trials- the wholeworld- all show business.
But kid, you're working with a star, the biggest!

(Singing)
Give 'em the old razzle dazzle
Razzle Dazzle 'em
Give 'em an act with lots of flash in it
And the reaction will be passionate
Give 'em the old hocus pocus
Bead and feather 'em
How can they see with sequins in their eyes?

What if your hinges all are rusting?
What if, in fact, you're just disgusting?

Give 'em the old Razzle Dazzle

BILLY
How can they hear the truth above the roar?

BILLY AND COMPANY
Throw 'em a fake and a finagle
They'll never know you're just a bagel,

BILLY
Razzle dazzle 'em
And they'll beg you for more!

Give 'em the old three ring circus
Stun and stagger 'em
When you're in trouble, go into your dance

BILLY
Give 'em the old Razzle Dazzle
Razzle dazzle 'em
Show 'em the first rate sorcerer you are
Long as you keep 'em way off balance
How can they spot you've got no talents?
Razzle Dazzle 'em

And they'll make you a star!

November 28, 2021
If you're lucky, a few days after your twins are born, the hospital just let's you walk out with them. In fact, they insist you take them with you. No training, no classes, no probation...they really just let you walk out with 2 humans. #fatherhood — Tundey A. (@realtundey) November 28, 2021 This was me 12 years ago: And now look at them. In a little over 6 months, they'll be teenagers!   Every time I look at them, I am reminded of Obama's quote on being a parent:  "One of my favorite sayings about having children is it's like having your heart walking around outside your body." — @POTUS — White House Archived (@ObamaWhiteHouse) October 21, 2015
Post a Comment
Read more

May 31, 2012
A couple of times, people have accused me of writing really long blog posts. While I know that I have written some long ones , I think a blog ought to be more than a tweet or a facebook status update. This has been a problem for me because sometimes I want to write about a topic but I either can't quite write enough about it to justify making it a blog post or I just don't have the time to flesh out all my thoughts. So my blogger dashboard is littered with several unfinished blog posts that I started but didn't finished. For example, I had some really strong opinions on the Trayvon Martin case (back before Zimmerman was arrested). Mostly it was about how the case resonated with minority males (especially fathers) in a way in which non-minorities can't fathom. Not because they are insensitive but because they just can't do it. It's like expecting a 3rd world military dictator to understand the US Constitution. Oh yeah, where was I? Right, about writing really l
Post a Comment
Read more

February 17, 2011
A couple of years ago, I wrote a blog post titled "InfoPath & SharePoint (Part 1)". Back then I had just started working on a project using InfoPath 2007. So, expectedly, the post wasn't very complimentary to InfoPath (or SharePoint). In fact, I said: InfoPath sucks and SharePoint is the most expensive piece of crap ever. InfoPath, as a development environment, has absolutely no redeeming value. It's worthless.... ( more ) Since then my opinion of InfoPath has changed slightly. It still suffers from all the flaws I pointed out in that post. However, I think when used right, InfoPath can be an OK tool. I think it's well suited for designing one off forms and not for anything that requires complex logic or multiple iterations (like most software development requires). Alas, most CTOs fall in love with its point & click simplicity and integration with SharePoint that they try to use it to replace more developed technologies like ASP.NET. What do you get? A h
4 comments
Read more
Follow me on