August 10, 2017
This is a sad blog for me to write. A product I absolutely love is now being used for evil1 by the creators. If you have ever done any database work with Microsoft SQL Server, you've probably heard or maybe even used Redgate's various database tools. Those tools are a godsend and I can't imagine using SQL Management Studio (SMS) without Redgate2. It's literally the first thing I install after installing SMS. It's a tool that if my job didn't pay for it, I'll buy it with my own money. I love it that much.

So imagine my surprise yesterday when I realize that Redgate had made a few changes to their products. Originally, the licensing was pretty straightforward. You pay for a number of licenses, get your license key(s) and put it in the product. That's it. It was based on the honor system (i.e. that you aren't using it on more servers than you paid for). I am not naive enough to think people wouldn't have abused the system. It's the software industry...it's full of pathological smart people. So I wasn't too upset when, months ago, Redgate introduced a new way of licensing that required each developer to have a Redgate account. I work on a team of 7 developers...that's 8 developer licenses total. Plus a couple of licenses for our test servers. It was a pain to have to maintain yet another set of username/password for a product I was used to setting & forgetting. Still, I loved the product and the utility far exceeded my reluctance to create new accounts.

Fast forward to yesterday. I was using Fiddler to debug something else and found a bunch of HTTP requests to Redgate servers. 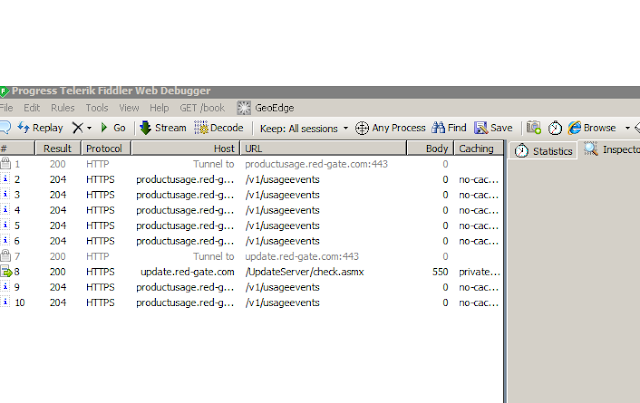 See all those calls to /v1/usageevents and /updateserver/check.asmx? The checking for product update didn't bother me even though I hate it. I would rather be in control of my product updates. But still that's not unusual. But the calls to "usageevents"? That was odd. Why is Redgate posting my usage events (whatever that is) to the mothership? Let's see what's included in the request:

This means that Redgate has assigned me a unique ID and is tracking me with that ID. Let see what's in other requests.

What do we have here...they are collecting all sorts of information about my computer that's not directly related to their products. I get needing this information for diagnostic after a user has complained about an issue. But silently collecting this info and sending it to some server that could be on the other side of the world is egregious in my book.

I sent them a tweet...you know because it's 2017 and who the hell is going to call a customer service number when you can tweet and shame them publicly. I said:

.@redgate Why do you track users of your products? When did this start? How do I opt out and get a refund for all of our license fees? pic.twitter.com/9ia402rtsa
— Tundey (@realtundey) August 8, 2017


A day later they replied:


The information we collect is used to improve our products - you can find out more here: https://t.co/fmjDEcMrYQ
— Redgate (@redgate) August 9, 2017

I went to the link and it said users can opt out. Well I checked my settings and I never opted in! So why the heck is it still sending my data back home? I sent them this:


The option to not opt-in is unchecked and yet your products is collecting the data and sending it back. It's also uniquely tracking users. pic.twitter.com/VpvSVBT1v1
— Tundey (@realtundey) August 9, 2017

Waiting for their reply to that. For now I have to decide: just how much do I love Redgate? I'll probably end up using my hosts-based ad blocker to block access to their mothership from my computer.


1: Evil in this context means Google's "Don't be evil". Not actual evil.
2: I use a mix of singular and plural forms to refer to Redgate products. I use a bunch of their products and found it easier to refer to them collectively.

November 28, 2021
If you're lucky, a few days after your twins are born, the hospital just let's you walk out with them. In fact, they insist you take them with you. No training, no classes, no probation...they really just let you walk out with 2 humans. #fatherhood — Tundey A. (@realtundey) November 28, 2021 This was me 12 years ago: And now look at them. In a little over 6 months, they'll be teenagers!   Every time I look at them, I am reminded of Obama's quote on being a parent:  "One of my favorite sayings about having children is it's like having your heart walking around outside your body." — @POTUS — White House Archived (@ObamaWhiteHouse) October 21, 2015
Post a Comment
Read more

May 31, 2012
A couple of times, people have accused me of writing really long blog posts. While I know that I have written some long ones , I think a blog ought to be more than a tweet or a facebook status update. This has been a problem for me because sometimes I want to write about a topic but I either can't quite write enough about it to justify making it a blog post or I just don't have the time to flesh out all my thoughts. So my blogger dashboard is littered with several unfinished blog posts that I started but didn't finished. For example, I had some really strong opinions on the Trayvon Martin case (back before Zimmerman was arrested). Mostly it was about how the case resonated with minority males (especially fathers) in a way in which non-minorities can't fathom. Not because they are insensitive but because they just can't do it. It's like expecting a 3rd world military dictator to understand the US Constitution. Oh yeah, where was I? Right, about writing really l
Post a Comment
Read more

February 17, 2011
A couple of years ago, I wrote a blog post titled "InfoPath & SharePoint (Part 1)". Back then I had just started working on a project using InfoPath 2007. So, expectedly, the post wasn't very complimentary to InfoPath (or SharePoint). In fact, I said: InfoPath sucks and SharePoint is the most expensive piece of crap ever. InfoPath, as a development environment, has absolutely no redeeming value. It's worthless.... ( more ) Since then my opinion of InfoPath has changed slightly. It still suffers from all the flaws I pointed out in that post. However, I think when used right, InfoPath can be an OK tool. I think it's well suited for designing one off forms and not for anything that requires complex logic or multiple iterations (like most software development requires). Alas, most CTOs fall in love with its point & click simplicity and integration with SharePoint that they try to use it to replace more developed technologies like ASP.NET. What do you get? A h
4 comments
Read more
Follow me on